Quit buying your kombucha at Whole Foods, you filthy sellouts

Over the last year or two, I've been thinking and having a lot of conversations about how Pittsburgh has changed in last decade, what that change means now, and what it means for the future of the city -- especially for the people whom, by virtue of birth, choice or other circumstance, were fully invested in the city before it showed the kind of promise that's led to years of obnoxious, clickbaity listicles, Portland comparisons and widespread use of the absurd term "livable."

These conversations really took off last October when the Pittsburgh episode of Anthony Bourdain's "Parts Unknown" quite masterfully distilled the questions fueling these discussions into a compelling, digestible 22-minutes.* And in the midst of one of these discussions, I wondered if Pittsburgh is getting just a little too precious for its own good. Like, is this city turning into a miniature top hat you'd put on a small dog so that you and the dog could have matching Halloween costumes?

I'm already worried the answer is "Yes." So when I see something like this, well...

Naomi Homison saw opportunity for real growth for her business when Pittsburgh Juice Company needed more space beyond its Lawrenceville location next to her brother’s yoga studio.

She bought the former 31st Street Pub at 3101 Penn Ave., a building with “good bones,” and asked other Pittsburgh food makers to become partners in a new venture, Heirloom Superfood Market. When renovations are complete, the market will open in late spring or early summer.

Though this reads like a letter from Portlandia Island, there's nothing terribly wrong here. The 31st Street Pub closed in 2015 after a 53-year run, the last 21 of which saw it reborn as the heir to the Electric Banana, hub of Pittsburgh's wildly underappreciated punk scene.** Apart from the objectively shitty aims and consequences of gentrification, there's nothing really wrong with this; re-purposing a vacant building doesn't displace anyone, and the Strip District hadn't really been a residential neighborhood for 40 years before developers started putting up condos and lofts targeted at wealthy yuppies and empty-nesters. Times change neighborhoods, beloved locales close. The way of things, circle of life and all that.

By placing orders together, her company and Pure Grub, Fickle Fox Fermented Foods and Frontier Cultures will lower their prices and be able to offer “amazing, hard to find ingredients” that include superfoods such as chia, flaxseed, hemp seeds and nutritional yeast.

With recent emphasis on plant-based diets and whole foods, it’s a good time to open a store offering natural foods and super foods, says Homison — even with big players in the market such as Whole Foods, East End Co-Op and Trader Joe’s. Sure, you can order coconut butter online, but some people “are conscientious enough that they don’t really want to be ordering, with all that packaging and shipping, just so you can get a thing of coconut butter.”

Did you feel that? That was me rolling my eyes so hard that it caused harmless but measurable seismic activity all the way to Van Meter, Iowa.

Heirloom, she predicts, will fulfill a need. “This area, the Strip District and Lawrenceville/Polish Hill, has been dubbed a food desert and it’s a very real problem.

Of course. The Strip District is a food desert. It is also a craft distillery desert and a regional history museum desert.

There are no grocery stores, let alone a place to find the real specialty stuff. And we’re going to have options, things that aren’t so scary for people who are afraid of healthy stuff.”

You know what I hate about the Strip? There's just no food. Like, anywhere. But it's not just that there isn't any food in the Strip District, it's that there's none of that really good specialty stuff. You can't get all kinds of fresh meat, fish, cheeses, coffee or pastries! And forget about exotic cuisines like Polish or Lebanese food, or the best goddamn banh mi you've ever had in your miserable life, lovingly handmade by a charming old Vietnamese woman in a tent standing next to a fabulous Italian restaurant and wine bar.

AND WHERE IS ALL THE OFF-BRAND STEELERS MERCH? THERE'S NOWHERE IN THE STRIP TO FIND KNOCKOFF BLACK AND GOLD GEAR AND AT HEIRLOOM WE'RE GOING TO CHANGE THAT, GODDAMMIT.

And we know people will love having us in that part of town because the one thing it has in spades is free, convenient parking -- you know, so you don't have a terribly long walk back to your car with that 60-lb bag of chia seeds.

For years, there's been this circuitous back-and-forth about what to do with the building we call the Produce Terminal. A big part of that conversation has been the mayor's desire to see it turned into a public market, and he'll go on to cite Seattle's Pike Place, Cleveland's West Side Market and Boston's Secret Warehouse in Southie Where You Go To Buy Imported Chinese Tom Brady Jerseys. Seemingly lost in the conversation about bringing a public market to the Strip is that the Strip already has a public market. It's called Penn Avenue.

In 1996, documentary filmmaker and local hero Rick Sebak released "Strip Show" -- a 122-minute documentary entirely on this particular part of Pittsburgh. You can buy on the WQED-TV's website, where it's described thusly:


"The Strip District is a delicious old neighborhood in Pittsburgh. On most Saturday mornings, it's one of the best places on earth, full of hungry people, crunchy fruits, snappy vegetables, world-class street food, cool characters and tasty surprises."

But that was 22 years ago! Surely the neighborhood has changed substantially! To find out, I consulted local zine NEXTPittsburgh, whose neighborhood guides make it a fabulous resource for residents old and new. NEXT's "Things to do in The Strip District."*** Its subhead? "Once a hub for manufacturing and shipping, the Strip District is now a food and shopping destination unlike any other in the world." They offer nothing to back up that assertion, apart from 11 pages of comprehensive Strip District food-centric guidance.

What do the experts say?

Food deserts are defined  as parts of the country vapid of fresh fruit, vegetables, and other healthful whole foods, usually found in impoverished areas. This is largely due to a lack of grocery stores, farmers’ markets, and healthy food providers.

Ah ha! Surely, the USDA's Food Desert Locator will confirm what we all know to be true: that the Strip, Lawrenceville and Polish Hill are bereft of food, and only we, the noble chia merchants at Heirloom, can save them! 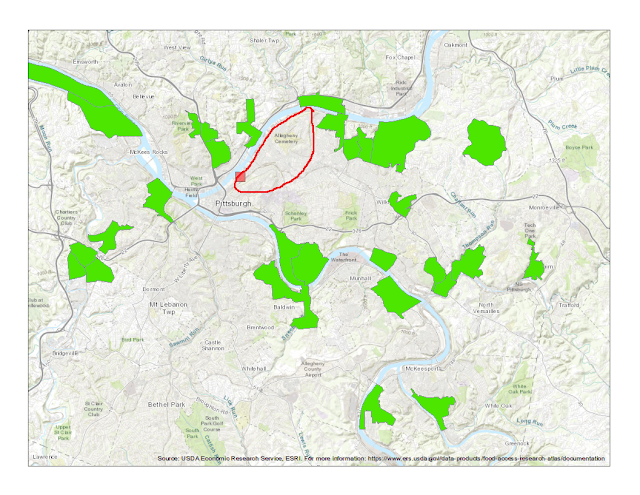 Because you shouldn't trust my crude encircling of the neighborhoods in question, I encourage you to follow that link, plug in each neighborhood individually and see what the maps say. These are not, by any definition of the term, food deserts.

Is all of the piling on? Maybe. But when I worry about this city jumping the proverbial shark, this is exactly the shit that scares me:

To introduce Heirloom to the community, the partner businesses have planned a series of events in the months leading up to its opening, which they’ll publicize on Facebook and Instagram. The first event, in December, was a holiday retreat offering acupuncture and didgeridoo sound therapy. “It’s not just about food. It’s about overall wellness,” Heirloom says in a January 2 post on Facebook.

The only form of therapy with a didgeridoo I can fathom participating in involves violently smashing a didgeridoo.

Sure, you can order coconut butter online, but some people “are conscientious enough that they don’t really want to be ordering, with all that packaging and shipping, just so you can get a thing of coconut 'butter.”

To reduce packaging, everything at Heirloom, including coconut butter, will be sold by the handful.


I don't buy chia seed, in bulk or otherwise. And in the event I needed to, I would sooner buy it online from Hezbollah and have it sent directly to my residence in a comically absurd amount of packaging before I ever set foot in Heirloom.

And it's not that I have anything against healthy foods, organic produce, fad terms like "superfood" or small, local business. I don't.**** But for someone to make statements like this takes either incredible gall, a fundamental lack of understanding their setting or the complete absence of any self-awareness.

That's it. As always, your comments are not welcome.

*We're not reigniting the absurd conversation which followed the episode. If you want to bitch about that, go to Reddit or start your own goddamn blog.

**I was never big into punk, and I didn't frequent the 31st Street Pub. But my handful of visits were equally exhilarating and terrifying. My favorite part was the red LED scrolling marquee above the bar that read "FUCK" on the top line, and cycled through the names of nearly every other bar in Pittsburgh below it. FUCK THE BRILLOBOX. FUCK NEW AMSTERDAM. FUCK ROUND CORNER CANTINA. FUCK SILKY'S. It was wonderful.

***Full disclosure, I wrote an earlier version of this guide for NEXT in 2014, so I've been to the Strip before. Spoiler alert: they have food there.

****This is only 75 percent true. I have a tremendous problem with ridiculous terms like "superfood."
Posted by Matt at 10:21 AM

Labels: pittsburgh, portland, prove me wrong, things having nothing to do with randy moss