Put Kang on the shelf

Pittsburgh Pirates infielder Jung Ho Kang is being investigated by Chicago police over an allegation of sexual assault.
Kang has not been charged with a crime. He is considered a "person of interest" in this investigation, which is still in the information-gathering and evidence collection phase.
A 23-year-old woman alleges she was sexually assaulted by Kang, 29, on June 17, when the Pirates were in Chicago to play the Cubs, police spokesman Anthony Guglielmi told ESPN.
We see multiple dozens of cases every year involving male athletes accused of some variety of sexual misconduct. It’s beyond sad that the fight against one of our most pervasive societal cancers has to make the A-block in SportsCenter just for more than half the country to acknowledge that it’s a problem, and even worse that only a few of these cases – the larger scandals like those at Baylor and Penn State, or those involving sports’ bigger names – get people to start thinking about what’s right versus what isn’t.
More often than not, they don’t, and we react to these stories thusly:
“Big Ben is suspended for four games? Man, it’s going to be tough for the Steelers to come back from that. Who’s going to start?”
“It’s good to get these games against the Yankees out of the way before Chapman comes back from suspension.”
Hell, why limit ourselves to historical/straw-man arguments? Here’s some shit people have actually written on the internet about this story since it broke yesterday:

Extortion? First, I don't think these guys know that word. Second, false accusations have become incredibly easy to weed out. They're the exception, not the rule.

He couldn't have done it because he doesn't speak English? He's being investigated for rape, not handing in a fake term paper on the Teapot Dome Scandal.

Those pesky women get away with everything! 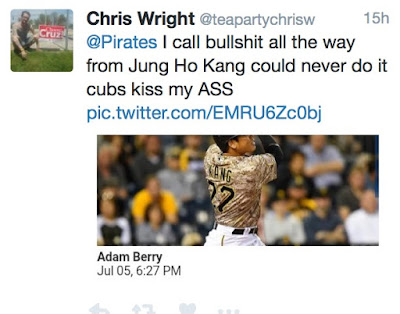 This one surprised me. There are people who would sooner believe that the Cubs organization orchestrated this entire thing than even acknowledge the possibility that a guy who has his own face tattooed on his leg would rape a woman.

Finally, we have our resident constitutional scholars.

Ah, the fanboy classic, “INNOCENT UNTIL PROVEN GUILTY! IS THIS NOT AMERICA?”
People who think that the “innocent until proven guilty” standard applies to private businesses and public opinion are the same people who have turned into Facebook partisans because they think Wendy Bell’s firing violated her first amendment rights.
"IS THIS NOT AMERICA?"
Sadly, this is America. And in America, we don’t empathize with the victims of sexual assault – especially if their attackers are players the Pirates need if they are going to have a chance to catch the Cubs in the NL Central.
For not yet having been charged, the story on Kang's role in this is awfully detailed. And creepy.

Police said Kang and the woman met on the dating app "Bumble," which states that the woman must initiate contact. Kang then asked the woman to go to his hotel room; when she arrived, she was given an alcoholic beverage, Guglielmi said.The woman blacked out about 15 to 20 minutes after consuming the drink and then alleges she was sexually assaulted as she drifted in and out of consciousness, Guglielmi said.The woman told police she didn't become fully aware of her surroundings until she was in a taxi en route to her home. She went to a hospital on June 19, where a rape kit was done, Guglielmi said. Guglielmi declined to say whether the results from the examination have come back.The woman's formal complaint to police came 10 days later, the Chicago Tribune reported, citing sources.

That's incredibly disturbing on a lot of levels. And while the law will ultimately determine whether or not Kang is charged – and if he is, his guilt or innocence – it doesn’t preclude Kang’s employer from taking some kind of action. Action, in this case, is the only right course. The Pirates should do the right thing and shelve Kang until authorities decide whether or not to charge him.
If Kang is charged with sexual assault, that’s it – place him on the restricted list and being working with the players’ union and commissioner’s office to terminate his contract. If he isn’t charged, he’s free to come back and play baseball.
Sadly, I don’t trust the Pirates will do the right thing, because I don’t trust any sports organization to do the right thing.
Sports organizations are largely male-dominated entities, and what they know and learn of rape culture is at best, exclusively aimed at protecting their assets and brand. At worst, their collective knowledge extends to damage control measures.
But I can think of two reasons they should:
Maybe we'll tackle the nonsensical drivel that fell out of Paul Zeise's brain, past all his editors and onto the Post-Gazette's website later on. I'm just not sure I agree with the notion that one needs to establish a pattern of rapey behavior before being looked at suspiciously, nor do I necessarily believe Zeise's assertion that "only two people know what happened in this case."

A hand-selected set of internet comments should is not representative of the public sentiment surrounding this Kang investigation. You're finding morons to get angry at. They will always exist.

I have the same gut feeling as you about Kang's innocence. If the account that you quoted is anywhere near accurate, Kang should be dealt with very severely by the law.

I think the question here is "At what point in a criminal investigation should a professional organization take disciplinary action against an employee?". It's clear that you disagree with the Pirates' answer to this question, but it seems the disagreement is really not that large. As soon as Kang has charges filed against him, he'll out of a job. So really, the argument you need to make is why allegations (as opposed to charges) are sufficient to morally compel an organization to take disciplinary action against an employee.

Suppose this was all a set up, isn't there some amount of injustice in tarnishing a person's reputation based on allegations? Further, if action is taken before the police arrive decide whether or not to file charges (guilty or innocent) that sets up a precedent for how organizations should handle cases in similar stages of investigation. Your article doesn't engage that aspect of the problem.

And now we can add you to the hand-selected set of internet morons.

First, you're reading into statements I'm not making. I have no feeling one way or another on Kang's guilt or innocence. Second, the reason I'm not willing to suppose this is all a setup is that most accusations of this kind aren't elaborate, money-grubbing, defamatory schemes. Most sexual assaults go totally unreported, and the ones that are are difficult to prosecute. Victims don't always come forward immediately because of psychological trauma, and that can make physical evidence extremely tough to gather. On top of that, district attorneys won't prosecute cases they know they can't win, even if there's a high likelihood the suspect is actually guilty.

Owing to those factors alone, I'd be shocked if charges are even brought in this case, and that's fucking terrible -- not because Kang is an athlete and athletes always get away with this kind of crap, because that's not even the point anyone on this blog is trying to make. It's fucking terrible because this is something millions of women are forced to deal with literally all the time, and we plug our ears, cover our eyes and ignore it.

Allegations are sufficient to compel the organization to action because when sexual assault is the crime in question, there is no correct thing to do other than believe the victim until you have a good reason not to.

And really, what would that cost the Pirates? Put Kang on the restricted list until the investigation is over, and they're without Kang for maybe a month or two? Why is that a big deal? Why are we so much more concerned with making sure we don't sully the good name of one man at the cost of telling a woman who might have been raped that justice for her doesn't matter?

Why do I still allow comments on this site?