Joy cometh in the morning

The Flying Nanners (official kickball team of Free Tank Carter) played and split a doubleheader tonight. When we got to Hough's (official bar of the Flying Nanners) after the second game, muddied and exhausted, it was just in time to see Marlon Byrd's seventh-inning double, followed by an incredibly fancy, opposite-field double from Pedro Alvarez.

Terror struck when Tony Watson was on the hill with two down in the eighth, as Root Sports showed Bryan Morris warming up in the bullpen, but a fly ball to center ended all speculation that we'd see anyone but Mark Melancon come the ninth.

I said last week when I started organizing a series of ballgame watching parties a Pittsburgh bars that I just wanted to experience the streak-breaking game in the presence of people who'd genuinely appreciate it. After three failed attempts and one Jeff Locke start -- for which I didn't bother to organize anything, knowing that Jeff Locke was starting -- I gave up. That win would come when it would come, and I couldn't keep trying to get scads of people out to bars on weeknights to watch terrible baseball. Even in success, leave it to the Pirates to make everything as difficult as possible.

So after two stupidly messy kickball games, to get to the bar and find not only that the Pirates weren't losing, but that they and Gerrit Cole were matching Yu Darvish and the Rangers blow-for-blow was about as wonderful a surprise as we could have hoped for. I didn't get to see it at on my terms, but I did get to see it with a crowd of people who recognized its significance.

Melancon came on and did his thing. My friend Melanie captured me standing next to Nilesh as Neil Walker scooped up the ground ball which ended it. 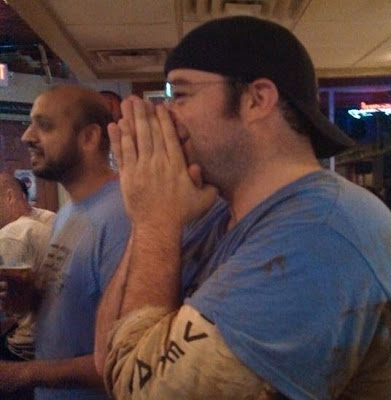 The entire bar -- everyone who'd come to watch Monday Night Football, the Pirates, or just have a beer following their league games -- erupted. And chants of "shots! shots! shots!" rang out, and we happily complied.

In that instant, everything was perfect, clean, right.

In a few hours, I will, for the first time since I was nine years old, wake up a fan of a winning baseball team.
Posted by Matt at 12:45 AM