Bud Selig has been waiting for the right occasion to brag about how clean MLB is of steroids.  Naturally, he chose the day after the goddamn home run derby.

Meanwhile, I've been waiting for the right occasion to use this gif in an FTC post:

Let's flesh that out a bit further for the AP:

1992- Selig becomes commissioner; MLB average is 0.72 HR per game.
1994- Average HR per game goes above 1.0 for only the second time in baseball's history.  This trend would continue on for the next SIXTEEN years.
1998- Big Mac and Sammy Sosa rejuvenate everyone's love of baseball, fireworks, subprime mortgages, and cut-off tee shirts.  The stage is set for the SUV boom.
2001- By his own retrospective admission, Alex Rodriguez begins using steroids.  He hits 156 HRs over the next three seasons.
2003- MLB conducts random testing of several players; no punishments attached.
2004- George W. comes out swinging in the last SotU of his first term, demanding that we all do more to combat steroids in our home lives.  At this point, the MLB 'punishment' for a first time offense is that the player remains unnamed and undergoes "treatment."
2005- Jose Canseco publishes his tell-all; there's also this page turner, detailing the BALCO mess, turning the screws on MLB to publish their own.  By now, the punishment for a first time offense is a 10 game suspension.
2006- MLB commissions George Mitchell to find out what the fuck is going on.  Amphetamines are banned; ADHD runs rampant.
2007- Well after the season is over, the Mitchell Report is released, telling us exactly what the fuck is going on, and telling us that just some common sense shit is all we really need for fixing all of it.
2012- HGH is finally tested for, even though it was possible to test for this shit years earlier.


'People say, 'Well, you were slow to react.' We were not slow to react,'' Selig said Monday. ''In fact, I heard that this morning, and it aggravated me all over again.''

There were eight violations of the major league drug program last year, and All-Star game MVP Melky Cabrera was among those who served a 50-game suspension following a positive PEDs test. There have been no suspensions in the big leagues this year.

Way to overlook the failed prosecution of Ryan Braun, AP.

During a question-and-answer session arranged by Politico, a question was sent by Will, identified as an 8-year-old in Los Angeles. He asked: ''How old will I be when ... you can say that there are no more cheaters in baseball, not one?''

Bud Selig answer process:
=Was the question about Pete Rose -> No.
=Can I casually mention how excited we all are to finally bring the All Star Game back to New York? -> Maybe.  But let's make sure no one is accusing us of being racist first.
=Is someone accusing MLB of being racist? -> Not sure.
=Did they mention the black guy who played baseball (if so, use his name in response, and point out that MLB couldn't be racist if we let him play)? -> No.
=Is this question about steroids? -> Yes.
=Find it offensive and point out that this whole line of questioning misses the point.
=Return to top in time for next question.

''Will, this is what I would say to you,'' Selig responded.

You can practically hear the old adding machine cocking back its hinges, ready to roll into action on this one.

Here that Will?  Bud is telling you that you're never too young for a good "fuck off!"

''Some people say now that I'm over-vigilant because I'm worried about my legacy,'' he said.

I mean, that'd be fair if you were, Bud.  Like I would almost respect an old white republican asshole who makes $14,500,000 a year to do basically nothing, if he were like "Yo, I really dropped the ball on this steroid thing, but I'm going to own that, and I hope that by the time I leave office, I will have kicked this thing in the ass."

According to Selig, Major League Baseball's decision to hire former U.S. Secret Service director Mark Sullivan to assist in its Biogenesis probe was evidence of baseball's effort to ensure there are ''no stones unturned.''

''We have many groups, consulting groups that are working on this whole investigation,'' he said.

I haven't read the entire AP copy.  I'm going through it as I write.  I'm going to try projecting what comes next, and then copy and paste what actually happens.  Let's see how I do...

On other subjects, Selig:

-stands in solidarity with Paula Dean.  He's also not concerned with the declining number of African Americans playing in the majors.

-thinks instant replay still needs fine tuning, but that "we're getting closer every day to making sure the game is as good an experience for fans as ever before."

-is concerned about spending on players, whose average salary rose 6 percent to $3.65 million on opening day, the steepest rise since 2008. Baseball's revenue is projected to reach $8 billion this year, and Selig wants clubs to spend less than half on players. ''We've made some new television deals and our clubs got a little excited, and so we may go over 50 percent, and that's dangerous. I think we have to work on more mechanisms.''

-is deferring action on the Oakland Athletics' preference to build a ballpark in San Jose until the city of San Jose's antitrust suit against MLB moves forward. San Jose is in the territory of San Francisco Giants. ''We are defending ourselves. So before I make any decisions, we'll see what happens to that. I feel pretty good.''

-tried pomegranate juice for the first time last week.  Absolutely hated it.  Given a choice, the commissioner will opt for constipation every time.

-is concerned with Tampa Bay and Miami, which have the lowest attendance averages in the major leagues. ''I certainly haven't given up on Florida. The demographics are too good,'' he said. As for Tampa, ''We have a stadium problem there. There's no question about it.'' And for Miami, ''We've had some things happen that need to be corrected.''

First of all, I think I can pretty accurately speak for everyone in America when I say: we have ALL given up on Florida.  Hyperlinks not needed.

Secondly, this stadium problem shit is scandalous.  Here's what happens: the tax payers build a giant piece of multi-purpose concrete, some republican buys the team and determines that the concrete isn't valuable enough.  So he bilks the city and state out of hundreds of millions of dollars, saying it's the only way to boost fan interest.  Once the stadium is built, the value of the team increases regardless of performance.  Therefore, the owner has no incentive to actually fill the seats of the new stadium or keep expensive players on the payroll.  Thus, the city residents are left on the hook paying for a stadium they didn't need, while not attending the baseball games in which their gutted team is failing to compete. 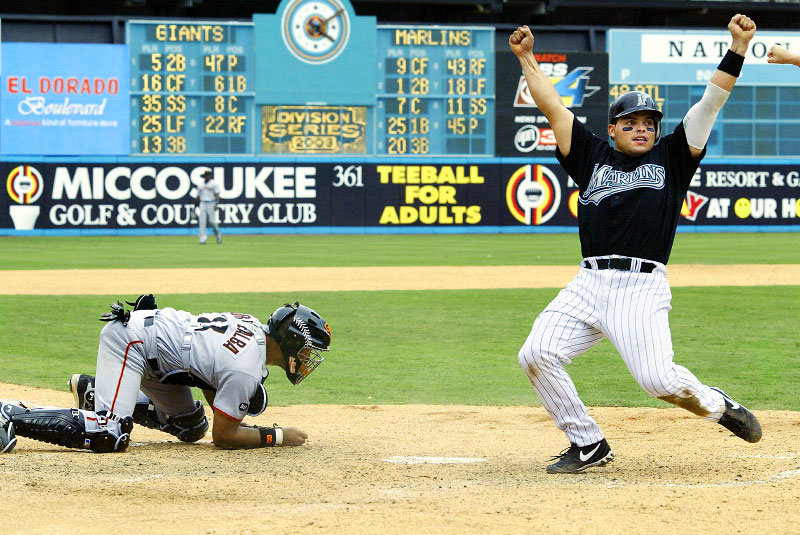 -Asked what song he would use to for his introduction while walking to home plate for an at-bat: ''Bridge over Troubled Water.''

(Big reveal: that's a gif of a pressed-for-cash Art Garfunkel.)
Posted by FRANCOfranco at 6:28 PM