Dejan is a self-righteous wang sometimes, but so am I 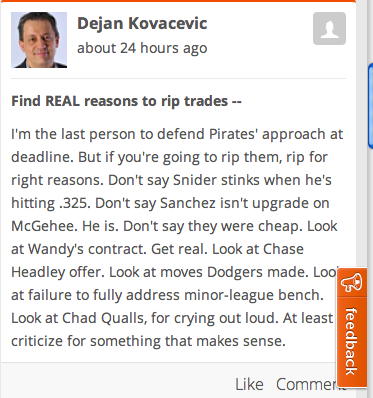 Snider stinks because his BAbip of .382 is unsustainably high.
Sanchez career line: .261/.334/.420
McGehee career line: .260/.317/.421
I will say they were cheap whenever I damn well please. They sold prospects to the Astros in exchange for $5m to offset Wandy's contract.
I do not know what "Look at Chase Headley offer" means.
Ned Colletti is a dummy. Shane Victorino isn't a game changer. Hanley Ramirez is an F-factor. The Dodgers are irrelevant to Travis Snider being a shit ballplayer.
Failure to address the minor league bench? Are we talking about the 2011 trade deadline now?
Chad Qualls is garbage. But that doesn't mean I can't also complain that Travis Snider is garbage. The reason we got Qualls was because we were short an arm, because we traded Brad Lincoln for Travis "garbage" Snider. I don't care that he's hitting .325 right now. That's a silly-ass number made up by the BAbip fairy.
My criticism is simply: some of the players on our team suck. I don't know what about that doesn't make sense.
Posted by FRANCOfranco at 8:34 PM