This shit will take you back to the 90s!

Go to Florida. It's a wasteland of gated retirement communities and rehab clinics. Guaranteed to bring back a whiff of your salad days.

When Alex Cora (#13, playing shortstop here) broke into the league. He is now a 36 year old journeyman, trying to make the Cardinals major league roster. That would be his seventh team in 15 seasons. He has a career WAR of 0.8.


Oh hey, and guess who else is down here-- Alex's older brother, Joey!

Joey Cora (#28) is currently the bench coach of the newly re-branded, Miami Marlins. His career as a weak-hitting, middle-infielder ran from 1987 to 1998, and only included four teams and 30 home runs (that would be 10 more dingers than fellow Vanderbilt alum, Pedro Alvarez; currently good for second place on the all time list). He is notable for having been stabbed by some murderous fans he pissed off, crying after the Mariners lost a playoff series, and being the double-play partner of the man walking in front of him in the picture.

That would be none other than... 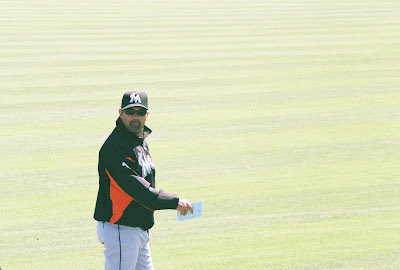 OZZIE!
Yes, the crazy man from the South Side has taken his talents to South Beach. Good for baseball, bad for the Marlins.

P.P.S. Until they do something truly remarkable on their own, individual accord (and let it be known, I do think Alex will lead the Cardinals in all meaningful categories this year: hits, walks, HRs, RBIs, stolen bases, saves, etc.) the Brothers Cora are going to share a tag on this blog.
Posted by FRANCOfranco at 5:43 PM

Labels: baseball, Franco's photos, OzzieBall, Salman Rushdie, spring training, the Brothers Cora, things having nothing to do with randy moss