I can't really ignore the signs

The powers that be are telling me to blog again.
Last night, I traversed into Downtown Pittsburgh to catch the Decemberists concert at the Benedum Center. When I go down to the Cultural District, I almost always park in the garage at
Sixth Avenue and Fort Duquesne Boulevard. It's incredibly central to everything I like to do Downtown -- right across the bridge from the ballpark, right across the street from the Byham Theater, right down the street from Heinz Hall and Six Penn, and a few short blocks from
Market Square. It's a good parking garage. But I digress...
My friend and I parked in the garage, then caught the elevator down to the lobby. As we were walking through the lobby, we passed by a bulletin board -- the kind with a big glass door over it. Attached to this bulletin board were several pictures of Steelers that someone had obviously just printed off the Internet. And right in the center of this hack-job Steelers photo collage was this: 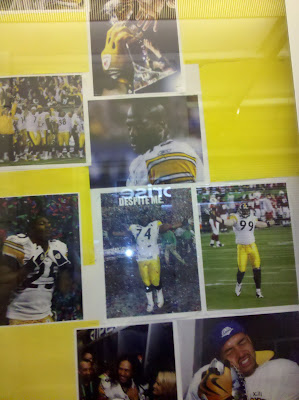 Right in the middle of this ridiculous little photo collage in the middle of a parking garage lobby in Downtown Pittsburgh is a photo of Willie Colon that two years ago next week, I found on the Internet and added an insulting caption to, then posted it to this very blog. And it was hanging there, totally un-ironically, complete with the caption. I made that, and now, two years later, someone has hung it in the lobby of a parking garage.
I guess what really blows my mind about this -- apart from that I'm now basically indistinguishable from Banksy -- is that someone I do not know who also isn't Jeff Pearlman seemingly reads this blog.
But then shit got weirder.
Again, I was attending a Decemberists concert. You know, indie-folk rock band, kinda old-tymey in their aesthetic, lyrically-driven ballads about love followed by death, everyone in the crowd has the same glasses as me, and we all pretty much look like this: 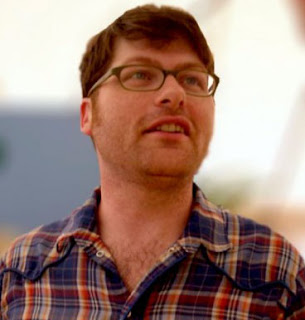 My friend and I took our seats in the first tier of the balcony. I don't think we were there for more than five minutes before I saw someone nobody would ever think they'd run into at an indie-folk concert.
Want to guess?
I'll give you a hint.
It was Bob Smizik.
Pittsburgh's favorite crotchety old sports columnist was at the Decemberists concert. And he paid the extra few bucks to sit in the Director's Circle seats.
This can mean only one of two things:
1) Seeing Bob Smizik at the concert, I was actually looking into my own future, and I will become a curmudgeonly old naysayer who complains about sports despite not having anything to say, but whose taste in music remains shockingly current.
2) I really need to blog again.
Actually, I guess it could be both or neither of those things, but that's two Smizmas miracles in one evening, and that's good enough for me.
Posted by Matt at 1:04 AM

Have we explored the possibility that Smizik made the sign? Or, possibly, that you ARE Bob Smizik, in a Fight Club-gone-wrong sort of way? I've never seen a picture of the two of you together...

I'd remind you that I did shoot those photos of him at The Pitt News centennial brunch, being snarky 'round the buffet.