We have, today, a submission from friend of FTC Brad Sanzenbacher. A Baltimore-area native, Brad worked for several seasons as the scoreboard operator of sorts at Camden Yards, and it is from those halcyon days he draws this story. Additionally, Brad is a phenomenal singer-songwriter of the Americana/folk-rock school, and his first album is due to drop later this year. We here at FTC highly suggest you check out his music. In fact, we're so serious about it that we didn't even feel the need to say so parenthetically.
Take it away, Bradley:

The story I’m about to tell takes place in 2006, during my first year working a job that gave me press level access at Oriole Park at Camden Yards. I was 21 at the time, and thrilled to be working a summer dream job in baseball. But the long baseball season took a strange twist for me when the Minnesota Twins came to town.

The food in the Orioles' (and most likely other teams) press lounge is notoriously rough on the stomach. It’s not bad food by any means, but catch the wrong mixture on the wrong day, and you’ll be lucky to see the first three innings of the game. Today was one of those “wrong” days, and an hour before game time, I found my self trapped in the men’s room.

The press level men’s room has a basic layout. There’s the door and a few sinks on one side, and three urinals on the other, with a stall next to the furthest left of them. On this particular occasion, I was in the stall when I heard the door open and saw a pair of feet shuffle up to the adjacent urinal. I heard a zipper and the familiar and distinct sound of trickling urine.

“AAaaaHHHH….” Said a familiar, full voice. “Why is it that taking a piss feels so goddamn good?”

Thinking this question was strictly rhetorical, I said nothing. After a moment, the wall of the stall rattled gently with sound of knuckles on metal.

“HELLOOO in there? Ya hear me? Why is it that taking a piss feels so goddamn good?!”

I hesitated for a moment, and debated saying nothing. After a few seconds, I responded simply. “I dunno…It just does, I guess.”

“YOU’RE GODDAMN RIGHT!! It just does!” The voice was content with my answer, and I was happy. But I was wrong in my assumption the conversation was over. “How about that shit you’re taking? How’s that treating you?”

Again, I thought carefully. Not sure if this was a prank by a fellow video staffer, I was careful not to say anything stupid. Finally, I just said, “I’ve had better.”

The sound of urinating was fading slowly, but the voice came back, more boisterous than ever. “THAT’S A GODDAMN SHAME! Every shit you take should be the best of your life! You gotta OWN THAT SHIT, my friend!”

The urinal flushed and the feet shuffled away. When I heard water running in the sink, I responded with a polite “Thanks.”

A few minutes later I emerged, and a tall man with a silver beard was in front of the mirror, gelling his hair and fixing it up the way broadcasters do before going on air. I pushed on the faucet and rubbed some soap in my hands. He paused his motions and looked at my empathetically.

“I’m sorry that shit wasn’t all you hoped it would be,” he said.

Face to face with him, I was more uncomfortable than ever. Trying to be funny, I said, “It’s okay. There’s always next time.” He liked this response.

“THAT’S THE SPIRIT!! I like that attitude, son! What’s you’re name?”

“Well, Brad, I’m going to be back in town in a few months and I’m gonna check back up on you. You had better have some good shits between now and then, understood?”

He walked out the door and it swung shut behind him. I stood in disbelief. I had just met Future Hall of Fame Pitcher Bert Blyleven. 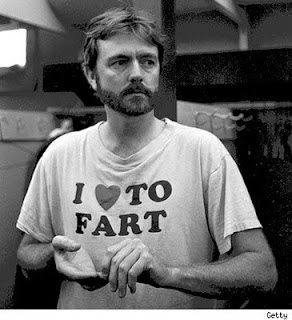 I had a lot of interesting experiences in baseball. I once stood in between Jim Palmer and Dennis Eckersley at the urinals and chatted with them nonchalantly about Miguel Tejada’s lack of hustle. I was in the clubhouse with the Rangers after their infamous 30-3 victory over the Orioles. And I once tried to convince Brady Anderson to make a comeback attempt so I could make a reality show about it.

But nothing comes close to Bert Blyleven taking personal concern for the health of my colon on a warm summer day in 2006. Most likely, he was just messing with me for his own amusement on a long road trip. But I walked away with a great memory, and for that, I am thankful.

If you liked this story, please listen to my music and give me a “like” on facebook or join my mailing list. And check back for news about my debut album, “Fear and Drought,” which will be available soon.

Take care, and congratulations to Hall of Famer Bert Blyleven.

(And for the record, he never followed up).

This story has everything.