Fulfilling a request from Henrik Lundqvist

Henrik Lundqvist is angry. After the Pens-Rangers game Nov. 15th in which the Pens had six power plays and the Rangers zero, Lundqvist said, "I'd like to see the penalty record the last five years in Pittsburgh. We're shorthanded so many times and it's definitely not our fault." Of course one of those ("not our fault") penalties occurred when Lundqvist threw his goal stick across the ice in disgust because his team was being penalized too much.

Lundqvist brings up an interesting question: what does the penalty record look like in Pittsburgh during the last five years? Conveniently, there have been five full seasons since the lockout. The Pens and Rangers have played each other 41 times, including playoffs, during that span. For games in Pittsburgh, the record shows (all data from espn.com) that the Pens had 121 power plays, and the Rangers had 98.

Boom! Yep, that must be it. Gary Bettman's league requirement that the Pens receive extra special treatment is proven, right? Wrong. During that same span, the record at Madison Square Garden shows a power play advantage of 112-83 for the Rangers. That makes the total five year comparison 210 power plays for the Rangers and 204 for the Pens. And guess what: when you throw in the 6-0 from a couple weeks ago, the total becomes 210-210. Fascinating!

How can this be? Wasn't Sidney Crosby anointed King of Hockey when he entered the league? Aren't the Pens supposed to get every call? Don't they get eight power plays per game while the opposition gets one or two? Lundqvist is right; his team is often shorthanded in Pittsburgh. But no more often than the Pens are at MSG, unless he's trying to claim that the Rangers were shorthanded any time Wade Redden stepped onto the ice.

What if Crosby, after a particularly rough night at The Garden, lodged a similar complaint? People would be all over him, calling him a crybaby, a whiner, and worse, even though the Pens fare just as poorly at MSG as the Rangers do in Pittsburgh. I don't know if this home/away spread is typical, but it makes sense. Teams tend to play much better at home, which may lead to a positive power play differential. If Henrik Lundqvist wants to throw a fit, that's fine. I don't think we'll see any temper tantrums from Marc-Andre Fleury Monday night at MSG.

We can set up a quick hypothesis test to see if either team is getting an undue home advantage. For the Pens, we want to see if 0.55 is significantly different from 0.52 with n=189 power plays. As you can probably guess, the answer is no (p=.40).

We can do the same with the Rangers: let's test if 0.57 is significantly different from 0.52 with n=176 power plays. Again, the answer is no (p=.18). Further evidence that Mr. Lundqvist should keep his mouth shut and focus on stopping pucks.
Posted by Nilesh at 12:15 AM 3 comments:

This, over the Yahoo! feed.

The Pirates chose to create roster space for other players in advance of the Rule 5 draft next month.

Pittsburgh made a similar move last winter with closer Matt Capps, who went on to be one of the majors’ top relievers for Washington and Minnesota.

Here's where we get away from pithy in favor of being verbose, and it's only because we're being provoked. Look, people: a reliever is really not worth anything at all unless you consistently have some kind of lead to protect late in the game. The Pittsburgh Pirates, circa 2010 were scoring approximately 1.03 runs per game, and had zero starting pitchers throw shutouts. Had Mariano Rivera pitched for us, his save total would have committed ritual suicide out of shame. Matt Capps: Not the answer!

Also, let's just point out, all of Capps' numbers were in line with his career averages, except for HR/9, which was largely influenced by his new parks.

CONTINUE, YOU PRESS OF ASSOCIATION!!

If we had had a pitcher win 16 games in any season dating from 1992 until present, we'd consider him a staff ace. What Zach Duke did as a rookie was phenomenal rookie luck. My dad warned me of it at the time, told me to not get too excited. He said: "Boy, you's a-throwin' way yer moneys goin' to that openin' day parade n' game. That southpaw ain't got a lick told on them other boys. 'Specially the colored ones." That was 2006. Zach Duke gave us one of the most mediocre opening day performances by any sophomore starter, ever. I had brought my Terrible Towel to cheer him on, but to no avail.

As far as LaRoche goes... eh. Whatever. Bryan Morris was the key piece in that whole deal, Bay was leaving town anyway. Now we have Pedro A. and Neil W. to play infield. Andy LaRoche is welcome to try to be claimed by anyone. Or anything.

All three were arbitration-eligible.

NEAL HUNTINGTON: Thank you for speaking with me, I know you're very busy.

ANDY LAROCHE'S AGENT: Neal, it's not a problem. I think what we have to say will--

NEAL HUNTINGTON: (signaling with a raised index finger.) Hang on there, I'm on the phone. (Reveals that he has his bluetooth headset on his other ear.) No. Sorry. Someone was talking at me ...Yes. I think you're right. No... I don't want Darryl Strawberry, I don't care how cheap he's willing to go. ...No. That's not right, that's why. Okay. Well. There are... 'people' in my office. Ciao. (To ANDY LAROCHE'S AGENT and ANDY LAROCHE.) Yes?

ANDY LAROCHE: I am happy to be ready to cash in and make MONEY!

ANDY LAROCHE'S AGENT: We would like to take you to arbitration.

NEAL HUNTINGTON: Are you eligible?

NEAL HUNTINGTON: Well. Then. In the words of Dave Coulier: you're cut.

Yep. He really sucked. Exactly the kind of guy you don't invite to the negotiating table.

“I am truly thankful for the opportunity the Pirates have given me and genuinely enjoyed my time in Pittsburgh,” Duke said in a statement. “I understand this business decision and wish the Pirates and my friends still on the team the best of luck in the future.”

I thank you, Zach Duke. You were a brief moment of hope, and then a refreshingly cold shower of reality. Anytime I think life if looking up, I just remember the kick in the teeth you gave me for 5 straight seasons.

So... when the AP editor was trying to come up with a title for this column, and he passed on 'LaRoche gives up on baseball', that was a wildly unethical journalistic move, right?

LaRoche, 27, and minor league pitcher Bryan Morris were considered the key players acquired by Pittsburgh in the three-team trade that sent Bay to the Red Sox and Manny Ramirez to the Dodgers. Morris has yet to pitch for the Pirates.

Bryan Morris better be decent. Otherwise this blog will turn into a place for kneejerk reactionism and anti-deficit-spending tirades.

Young, a bench player, hit .236 with seven homers and 28 RBIs in 191 at-bats. One of his season highlights was becoming the first major league player to homer off Nationals rookie Stephen Strasburg.

Have you ever met an old man who was really good at telling you about how good he was at a sport? That'll be poor Delwyn Young. And yes. He did take Strasburg deep. As if that could make up for the fact that he can't hit.

The moves with Duke and LaRoche weren’t a surprise, as it was evident late in the season that neither fit in the Pirates’ long-term plans.

However, the move to sever ties with Delwyn Young: total shock. It quite literally reanimated the swollen by seawater corpse of Roberto Clemente, so that he now lurks his namesake bridge as a saxophone playing albino. Such was the power of this roster move.

The team estimated it would cost at least $6 million to re-sign Duke for 2011.

I love baseball, and I love Pittsburgh. But if I were ever entrusted with the job of general manager of the Pittsburgh Pirates, I'd probably just funnel the money away to UNICEF. Seriously, though. When we're talking about a world where Zach Duke could potentially make $6,000,000, that's some immoral shit, right there. 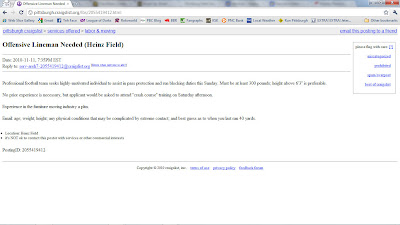 The Boys of Summer

Earlier today, on the The Tony Kornheiser Show, ESPN's Tim Kurkjian mentioned that Duke Snider is sick, and that ESPN had him write an obit the other day -- one he hopes they don't have to use anytime soon.
A lot of news organizations keep pre-packaged obituaries for certain people around, just so that they'll have them ready to go when needed. There's an old newspaper term for this, but I can't for the life of me remember what it is, though I feel like it's two words, the second of which is "list." As standard practice, the names on the list and the obits themselves are kept secret, simply as a matter of good taste. Sometimes, they're leaked. While it might seem insensitive, you can hardly fault news organizations for wanting to have something ready, just in case. As David Foster Wallace might have said, when they actually run it, they're "just being orderly."
This all got me thinking about just who's left from the original Boys of Summer -- the '55 Dodgers team that brought Brooklyn its only World Series championship.
Duke Snider - The Duke of Flatbush is the last starter left from the '55 squad.
Don Zimmer - Zim, then a 24-year-old utility infielder, put up a .731 OPS in 88 games in 1955.
George Shuba - A reserve outfielder who spent his entire seven-year career with Brooklyn. He played 44 games in the 1955 season, his last in the majors.
Bob Borkowski - A utility outfielder, Borkowski appeared in only nine games with the Dodgers after being acquired as the player to be named in a deal with the Reds for pitcher Joe Black. He saw no major league action after July 10th. Ever. Technically, he still gets a ring.
Don Newcombe - The ace of the Dodgers' staff. He went 20-5 that year, posting a 1.113 WHIP and a ridiculous 38 walks in 233.6 innings -- that's 1.5 walks per nine. Newcombe was an all-star that year, and won the Cy Young and MVP awards with a spectacular 1956 season.
Carl Erskine - Oisk was serviceable in '55, posting a 1.28 WHIP in just under 200 innings.
Ed Roebuck - The 23-year-old rookie hurled 84 innings for the Dodgers in '55, and pitched to eight batters in a single, two-inning appearance during the World Series.
Roger Craig - The future Padres and Giants manager saw 90.6 innings of work as a 25-year-old rookie in '55.
Sandy Koufax - The 19-year-old phenom went 2-2 in 41.6 innings over 12 appearances. While the stuff was there, the control wasn't. He struck out 30 and walked 28. Koufax did not pitch in the post-season that year.
Tommy Lasorda - If you'd told a Dodgers fan in 1955 that this guy would one day be one of the franchise's great figures, you'd have been tarred, feathered and thrown into a large body of water. In 1955, the second of his three big-league seasons, Lasorda pitched 4 innings in 4 games -- including one start. His ERA was a Mike Williams-esque 13.50. Not surprisingly, he didn't make the post-season roster, and was the recipient of the Dodgers' Not Invited Back award -- they sold him to the Kansas City Athletics during spring training the following year.
This has been fun. Maybe next up, we'll do the 1960 Pirates.
Posted by Matt at 11:41 PM No comments: