A story and a photograph

Seeing the Pirates get the crap kicked out of them is nothing new. In fact, some would say it's getting old.

What was new for me, when I saw them get beat up in Denver, was that I was rewarded for it... in the form of tacos!

You see, every time the Rockies score 7 runs at home, every ticket holder is gifted 4 crunchy Taco Bell tacos for the price of $1. (Of course, the way I was looking at it, the deal was really more about Paul Maholm allowing those 7 runs than it was about the Rockies offense. I mean, after 18 years of misery, I feel like we have to have earned something.)

Anyway. I'm stoked about this. Sure, I'm leaving the stadium feeling a little depressed that I can't go anywhere without watching the Pirates lose, but whatever: I had scored some tacos.

All I remembered from the scoreboard announcement was that I'd get to redeem my ticket the following day, and something about six o'clock. The next day rolls around, I'm heading out of town around 1pm, but before I leave, I pop into the Bell. Turns out the promotion is only good from four to six o'clock. Blah! Somehow I persevere and pay full price for a couple of tacos (I think it came out to like $2.80something). I get in the car, fully intending to book it for Utah and leave my tacos behind.

But then the Rockie Mountains happen, and my car turns into a 1992 Ford Taurus. I spend all afternoon chugging along at low speeds, from one redneck service station to another, trying to keep the engine alive at three miles above sea level. Finally, I pull over for dinner in this charming little Deliverance-esque township, where the front page of the evening newspaper is about a woman who had the good instincts to play dead when a bear started chewing off her arm.

This place, my friends, was no place for humans to be.

Anyway, I found myself there because I saw on the highway signs that they had a Taco Bell. However, as my car crawled off the exit ramp, I realized what time it was - 6:08 pm. The minutes ticked even further away as I pumped gas and contemplated: Do I go in there and cry? Just let it all hang out? The raw emotional state of driving for four days in a row with no end in sight? The trauma of automotive failure in bear country? The 18 years of shitty baseball?

Believe me, I had the tears ready.

Ultimately though, I chose not to. I kept the ticket, and some day, when the Pirates break .500, I still won't have my tacos. So it goes for Bucco fans everywhere.

Speaking of fans-- guess who I saw at the game... 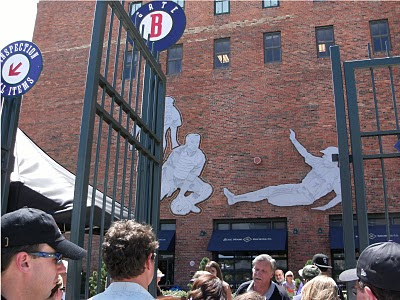 That's right, it's FTC's old friend, Salman Rushdie. I would have been in the picture with him, but someone had to hold the camera (and it sure as hell wasn't going to be a Coloradoan).

In conclusion: down some tacos, up some Rushdie. Success.
Posted by FRANCOfranco at 2:00 AM