Can we predict hockey standings?

The age old question. Each September hockey columnists give us their predicted standings. We read along, caught up in the impending arrival of a new season. We don't even mind when Scott Burnside calls a team "plucky". Then, if you're like me, you realize that these predictions aren't based on any quantitative measures and you're left a little unsatisfied. So here's the first step to finding satisfaction.

There are a few adaptations of the Bil James Pythagorean Expectation out there, but I decided to look at things a little differently. Let's look at the relationship between points and goal differential for the 2009-2010 season, then for all seasons post-lockout. 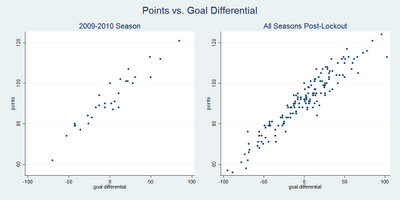 Hey, that's really linear! Using all post-lockout data, we can use a linear mixed-effects model to fit the data and come up with our predicted point values. Here's how the model predicts the 2009-2010 Eastern Conference standings.


And now the Western Conference:


The model does pretty well. Can we use this to predict the 2010-2011 standings? Yes, but we'd have to estimate each team's goal differential. Unlike baseball, we don't really have individual player level data (something like RAR) so it's a bit difficult to project how many goals a team will score and allow. I guess that's step 2.
Posted by Nilesh at 10:04 AM

What an amazing tease of a graph!

As a founding author of this blog, I find the use of actual data and analytical skills here to be deeply and existentially threatening. You can not graph grit, or guts, or gsoul. I have tried. Clearly, this new author is harbinger of computers running hockey.