Pirates, all of them

There are several ways of looking at this recent news that Mario Lemieux and Ron Burkle want to buy the Bucs, and almost all of them involve various levels of mistrust in someone.

First of all, we can mistrust Bob Nutting. We can believe that he truly is hanging onto his stake in the Pirates because he profits from the revenue share, even as the team and market suffer. This isn't to implicate Huntington or Coonelly, necessarily; in fact, they give me every reason to trust them. But Nutting could be pulling a scam.

Second scenario, we could choose not to trust Mario Lemieux and Ron Burkle's interest in baseball, and instead just see this as a sports market consolidation move, as is alluded to in the AP copy. Personally, I doubt Mario would go to many Bucs' games in June if his Penguins are still playing, but that doesn't mean he'd be a completely aloof, out-of-his-element owner. I mean, no more so than other owners in sports. I suppose what I distrust isn't his or Burkle's commitment, but their ability to see that the Pirates' actually do need to stay the course on this long slog of a journey towards a rebuilt farm system, and that before they do that, there's no reason to make splash signings in free agency just because it'll supposedly put butts in the seats.

Third scenario, everyone's crooked. We either have a guy who is content to spend nothing and cash in every offseason, or guys who spend on crap but make up for it thanks to a TV network cash cow.

Fourth scenario, maybe everyone isn't crooked? Maybe Bob Nutting does legitimately get it that we don't need to spend money until there's something to spend it on? And perhaps he's lining his pockets for that day? Maybe Mario Lemieux and Ron Burkle are legitimately concerned with Pittsburgh baseball and just want to help make the city a winner again?

I don't know. I defer all the conclusion-making to Matt who actually attended PirateFest. Ask him.
Posted by FRANCOfranco at 10:03 AM No comments:

Jeff Pearlman, of SI.com and the drastically less focused JeffPearlman.com, confirmed on his blog what we here at FTC have known since we first started reading his stuff: that Jeff Pearlman googles himself a minimum of once a week.

This isn't a shock, and it's not really anything to be ashamed of. Googling oneself is ostensibly just a nice new way technology allows us to stroke our own egos. We all do it; the more reasonable among us, though, just do it once in a while. To google yourself upwards of once a week, you have to have an astonishingly large ego and way too much free time.

We littles have things like work and school, showers, meals, social engagements. If Jeff Pearlman partakes in any of these things, it's probably because he's dragged kicking and screaming ("I can't go, honey! I think there's blood in my urine!"). Why actually watch or learn about sports when you can sit at home and blog about your feelings, or pen ill-informed diatribes that make you the sportswriter equivalent of someone who calls in to Glenn Beck three times a week?

In all fairness, Jeff does have some nice things to say about us in his post:

Oddly, I find the blog really enjoyable. Do I enjoy being bashed? Not really. Well, not at all. But I suppose it beats the alternative, which is having your stuff ignored and passed over.

Coincidentally, judging by the 0 comments beneath almost all of Free Tank Carter’s posts, the site is ignored and passed over. But it shouldn’t be. The guys who run it are funny, sharp and sorta irksome. Which is exactly what they should be. So give ‘em a read. You’ll like it.

Jeff Pearlman is right. The average post on FTC garners between 0 and .02 comments. This is not something we are terribly concerned with. And while we do appreciate Jeff's kind words for our work, we are exactly who we should be. WE ARE WHO WE THOUGHT WE WERE! And just as it's Jeff Pearlman's job to write really crappy sports columns, it's our job about make fun of really crappy sports columns. So while I'm touched that someone who once covered food and wine for the Nashville Tennessean finds our work entertaining, we're going to keep bashing his stuff until he starts writing things that make good logical sense.

There are plenty of terrible writers out there who inexplicably have jobs, and while we'll continue to seek them out and mock them in a fashion that might make both Ludwig Wittgenstein and Ken Tremendous proud, the staff of Free Tank Carter is proud to nominate Jeff Pearlman as its first official nemesis. May our symbiotic relationship of spite and hubris flourish for generations.

Jeff Pearlman would like to discuss your recent tragedy

The four people who read this website constantly complain that we don't produce enough content. They're right. We don't apply ourselves. They just don't understand that writing is really, really hard! Just ask Jeff Pearlman, who just can't seem to get his new book off the ground.

A few moments ago I dialed a phone number I have for Rick Kane, the former Detroit Lions running back who played in the NFL from 1977 through 1985. I wanted to speak to him for my book project.

When you're a not-quite-fit-for-print columnist, you don't write books. Straight projects, homey.

“Yes, I was trying to reach Rick Kane.”

“I’m trying to reach Rick Kane, the former running back for the Lions …”

“That’s my husband … (Tears, followed by a tone of angry disbelief) he died Christmas day.”

I didn’t know what to say.

You could have started by identifying yourself as a journalist, which is only, like, the first thing they ever teach you on the first day of intro to journalism. Even at UDel.

Let's get something straight: this is something that happens to basically everyone at some point in life. And not to diminish the pain that Rick Kane's widow is experiencing, but for Jeff Pearlman to characterize Mrs. Kane's tone as "angry disbelief" requires a suspension of angry disbelief. Have you ever had a parent or spouse die? Do you know someone who has? Since pretty much everyone dies at some point, you probably fit into one of these categories.

I had a friend in high school whose father died, and he always said that the toughest ongoing part of if for him was answering calls like that, but at the same time, he could never fault the caller for not knowing that his dad was dead. Realistically, how can you?

Really, Jeff shouldn't feel bad about this. I mean, how was he supposed to know?

Had I taken eight seconds to look at his Wikipedia page beforehand, I would have known.

Yeah, I guess there is that. Two instances of dreadfully shoddy journalism in one ten-second phone conversation. This is why you're my muse, Jeff Pearlman.

End of the year awards

Plenty of sites give out their own end-of-season awards. And whether they're serious or sarcastic, they'll all universally stupid. These are ours, and they will be no different. We only hope they make more sense than the real ones.

Tom Brady, Ricky Williams and Vince Young all had outstanding years, and all could be argued as deserving of the term "comeback player". However, nobody followed up a disturbingly solid year, then came back to Earth quite like Kerry Collins. Mazel tov to him.

The Mitch Berger How-Do-I-Still-Have-a-Job-in-This-Economy Award -- Shaun Suisham
You missed several field goals that would have won games for your team, including a 23-yard chip shot that would have sealed a win over the then-undefeated New Orleans Saints. He was unceremoniously released the following day, quickly catching on in Dallas in relief of Nick Folk, who would have won this award if anyone had bothered to sign him when the Cowboys cut him. The Paul Posluszny Glass Skeleton Trophy -- Charlie Batch
He lasted literally four snaps this season, and was injured on the third one. Next year, we're looking at him breaking his leg while jogging out to the huddle.

JaMarcus Russell
It's been real, man! No, no fries for me, thanks. Watching the ol' diet. Gotta get down to playing weight, ya know? Oh, wait. No, you have no idea what I'm talking about.

The Chris Henry Memorial Award for Courage -- Jim Zorn
He had his play calling duties stripped from him back in October and given to a guy whose principle occupation at the time was as a church bingo caller. He spent the entire year as a lame duck on a shitty team, yet even in the final weeks of the season, refused to acknowledge the possibility that he might not be back next year. He called the single most laughably absurd play of all-time, the simple formation of which forced the Giants to take a defensive time out. And then he called the exact same play again. After he was fired, he was escorted out of Redskins headquarters by security at 4:45 a.m. You might call it arrogance. We call it courage.


The Bob Ligashesky Award for Special Teams Ineptitude -- Jim Zorn
Normally, you'd think this would go to Steelers ST coach Bob Ligashesky. After all, Steelers coverage teams allowed return touchdowns in eight consecutive games this year. But this is just too good. There was a small sliver of a possibility that Jim Zorn could have gone on to a successful career as a quarterbacks coach, or even an offensive coordinator in the NFL. This play erased any chance of that ever happening. Congratulations, however, are in order to Mr. Ligashesky, who since leaving the Steelers' organization, has taken over control of the Penguins' power play.


The Woody Hayes Punch of the Year -- Tom Cable
Coach Cable locked this one up before the regular season even started. Props, though, to Albert Haynesworth for his stellar late-season charge.

The Bam Morris Convict of the Year -- Plaxico Burress

The Clinton Portis Medal for Fantasy Football Genocide -- Matt Forte
We here at FTC are currently consulting with our attorneys about what it might take to have Matt Forte extradited to The Hague and tried for war crimes.

The Conn Smythe Trophy -- Evgeni Malkin
We just want Geno to know that we still love him.

Best New Sitcom About Fantasy Football -- FX's "The League"
If you haven't seen it, check it out on Hulu or something. We never thought a TV show would so appropriately capture the spite, hatred and juvenile hubris of fantasy football. This show does.

The LaDainian Tomlinson "Who Stole My Relevance" Award -- Adrian Peterson

The Adrian Peterson "I Stole Your Relevance" Award -- Chris Johnson

The Herm Edwards Quote of the Year -- Steve Smith


FTC Man of the Year -- Chad Ocho Cinco
He had an outstanding year, and his performance on "Hard Knocks" was damn near legendary. 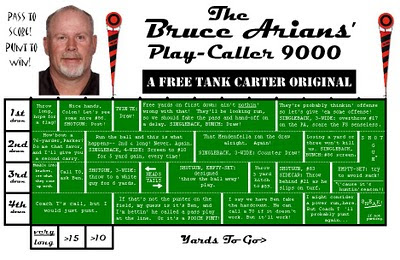 Posted by FRANCOfranco at 10:53 PM No comments: