"That's pretty hard to do."

-Pirates manager John Russell said of Bixler striking out in 69 percent of his plate appearances this season.
Posted by FRANCOfranco at 2:18 PM No comments:

Crosby's fuzz was recognized by VS. before mine.

One guy referred to it as "his...scruff."  And then the other guy said "Well, that's one more thing you can say about his development... at least this year it's somewhat credible."
Posted by FRANCOfranco at 7:37 PM No comments:

Well, we're into round two, with game 3 set to begin in less than two hours time.  Sid and I have both been working overtime on the beards, and here's what we got: 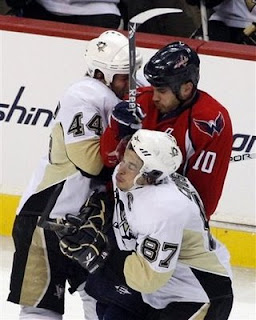 Crosby's puckering up in this shot to really accentuate all three hairs (note the third one coming below the lip area.)
Not bad, not bad.  A little Rogaine around the cheek areas might accelerate the process, but on the whole, this is a good start for our Captain.
While we're on the subject of hockey, I just thought I'd mention, that it's really important for Evgeni Malkin to make his presence known.  Staal's line has looked damn good, and you can't argue with the results we're getting out of the first squad.  So it's really going to be up to Geno and Sykora to make Varlamov work when his A-team isn't in front of him. 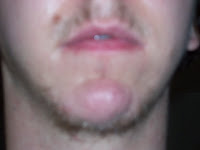 Okay, so back to the fuzz... here's a picture of my chin, taken just today.  (Sorry to those of you who just ate.)
As you can see, I have what's called the "mole advantage."  If nothing else works, I can fall back on the birth mark to yield a hair or two.  I think that's also a neck beard that's coming in, but as you'll remember: DOES NOT COUNT!
Not the best hockey fuzz you'll ever see, not the worst.  We're definitely improving from last year, and as our bodies hit puberty we'll probably both be better hockey players.
Hey, speaking of hockey players-- isn't it time for Sergei Gonchar to bury one in the net??  I'm all for this new-found possession game (it really is everything I ever wanted from these guys), but someone needs to be the one to pull the trigger after a good cycle.
Posted by FRANCOfranco at 5:00 PM No comments: 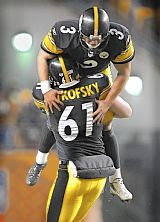 To both Jared Retkofsky and Larry Foote.

Jared, as we all remember, saved our bacon after Greg Warren went down.  He selflessly put his career as a furniture mover on hold to pitch in on our special teams unit.  For that we thank him.
Also: our thoughts are with him as he recovers from a motorcycle accident.  (Yinz need to learn from this by now.)

Larry Foote has been with us for the past seven years.  In that time he recorded 288 solo takedowns, and 145 assists; 14.5 sacks; 1 safety; 3 interceptions for 26 yards; 7 forced fumbles, and 5 recoveries for a total of 27 yards.  More impressive than any of those numbers is that since being drafted, he's played in every regular season game except two.  While I respect his decision to keep on moving, it's weird to lose a guy who has started the last 80 games for us.

His play was never flashy, but I think that's what was so great about him.  Just another humble piece in Dick LeBeau's dangerous system.  A brick wall against the run, and a stable personality in the locker room.

Best of luck to both of Yinz, from all of us at FTC.
Posted by FRANCOfranco at 9:58 PM 1 comment: 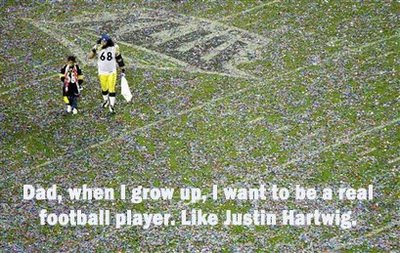