Cris Collinsworth is the heart and soul of the sex tourism industry, as it exists in Hawaii today.

Joey Porter referred to Troy Polamalu's baby as his nephew. Take a moment to digest that filet mignon of a concept: UNCLE Joey Porter.

There was a visibly tense moment in the broadcast, when NBC had Tiki Barber interview twin brother, Ronde Barber. Tiki threw him a softball question, and Ronde turned it around with an "All I know is that I'm better than you," response. My desire to see Tiki cry on national television was halted by the startling realization that we were on the verge of just that. It only took one brotherly insult and the lip was quivering, the sweat beading, and the lump forming in the dude's throat. Some serious demons need to be confronted before NBC can allow him back on the sidelines; that much is clear.

Rod Woodson said if he had to choose, he'd go into the Hall of Fame as a Steeler. He also described James Harrison's interception as the greatest play in Super Bowl history.

Dermontti Dawson was not available for comment.
Posted by FRANCOfranco at 8:01 PM No comments:

10 guys I'd consider inviting to camp...

...who may or may not be recently retired; have career ERA+'s of 100 or better; would be able to give Jimmy Barthmaier, Sean Burnett, Jesse Chavez, Zach Duke, Phil Dumatrait, Tom Gorzelanny, Craig Hansen, Evan Meek, Ross Ohlendorf, Ian Snell, and Tyler Yates a little competition; and are unwanted by everyone else in baseball, thus making them a steal for us--should they make the opening day roster."


Kent Mercker - The 2008 price tag on this workhorse was $600,000. And that was back when he was in demand somewhere. That's why I'm recommending Huntington call him up, tell him he's a piece of shit that doesn't deserve to take the field, and then grant him one last chance to prove himself-- for major league minimum wage. Something tough like that. Worst case scenario, we get turned down by Kent freakin' Mercker: boo hoo.


Luis Ayala - I don't know how this K-train got derailed, and I'm not about to read the wiki to find out. Dude was flat out sick in DC, and if he's willing to work for less, surrounded by idiots, and to the point of injury, I'm willing to talk turkey with his agent.

#1 reason this can't miss: Craig Biggio was 0/8 in his career against Ayala, with 2 strikeouts.


Orlando Hernandez - El Duque made $7,000,000 from the Mets last year. At age 42, he has to realize that his only chance of donning the black and gold (and red weekend jersey), is on the Roberto Hernandez package. I know the man earned a World Series ring with the Yankees, escaped Cuba on a life raft, and won 17 games in a season, and I understand that we don't actually have anyone on our club who has done those things. Regardless, it's a buyer's market right now, and so far the sharks in these waters aren't biting.

#1 reason this can't miss: Zach Duke's WHIP is creeping up on what my zip code was in Oakland; the same cannot be said of El Duque's.


Paul Byrd - Byrdie was making $7,500,000 last year. Compared to what we were paying Matt Morris,* we'd be looking at a savings of $2.5 mil, and that's before we convince Byrd to accept a pay cut for the sake of keeping this dream team together.

#1 reason this can't miss: Byrd's dentist is the Pusher-man, and we've got some cavities to fill.

(*ohmygod I had literally repressed the whole Matt Morris travesty from my mind until just now, when I went to look up our 2008 payroll to see who was the top salary hog... I am so much angrier as a person now that I've been reminded it was him.)

Eddie Guardado - Okay, so as of two days ago, he's been off the market. I don't know, I'd still be willing to look at a trade. The papers would have fun with a 'Steady Freddy' for 'Everyday Eddie' swap, I bet.

#1 reason this can't miss: This shit about him not allowing a triple in 10 years is compelling, if true.


Jose Mesa - As long as Omar Vizquel is playing, there's reason to think Jose's still got it in him. In 2005 we had him riding the gravy train to the tune of $2 million; the year before he was at $800k. I say we structure the deal like this: every W brings him closer to the former mentioned figure, every HBP takes him back to the latter.

#1 reason this can't miss: Shoot... it's hard to pick just one. I'm going to have to go with the color coordinated glove.


Ugueth Urbina - How hard can it really be to spring someone from a Venezuelan prison? I say we put down five figures for the bribe, then offer Oogie minimum wage if he makes the club; revoked parole if he doesn't.

#1 reason this can't miss: throughout his career, Urbina has held right handed hitters to a .183 batting average.


John Rocker - Crazypants has been out of baseball now for 6 years. Obviously the question is whether or not he's still in shape. To that end, I'd like to refer you to a little thing called Pros vs. Joes. If you're familiar with the format of the show, you'd know that there are currently members of our expanded roster who would be eaten alive by amateur, aspiring athletes - also known as 'Joes' - if given the chance to go on television. I believe John Rocker held his ground, and that's why he's the bigot of choice for us.

#1 reason this can't miss: Oh, it can miss, alright. This can miss big time!


Rod Beck - Number 24 on the all time saves leader board. 1994 Rolaids Relief pitcher of the year. 3 time All-Star. Led the league in games finished in 4 different years. However, pile of accolades aside, we're again looking at some of the same question marks seen with the other guys on this list (Can we get him for a fair price? Will he be in shape after being out of baseball for sometime? How many days rest will he need between appearances? etc.). Despite all that, I think we have to make a push for him. We're treading water as it is, now, and the only way to revitalize a pitching staff is by being willing to take some risks, and infuse it with some new lifeblood.

#1 reason this can't miss: Shooter will almost certainly have a more respectable K/BB ratio than Craig Hansen this year.


Bob Wickman - If we sign Wicky, I'll buy us all season tickets for 2009. You heard that right. Crank up the old petition machine.

ALL WE DID WAS SMASH FACES! 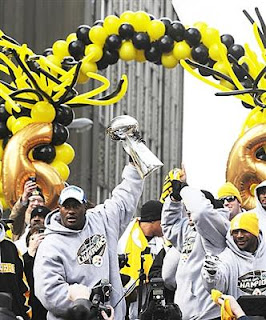 Okay. I can finally breathe now. But I still don't know what to think.

Yes, the game was extremely entertaining -- certainly one of the more entertaining Super Bowls we've seen. And it was a hell of a lot more climactic than the Steelers' Super Bowl XL victory, which was a relative shitfest of a game when compared to the preceding road playoff wins in Cincinnati, Indianapolis (still the greatest game I've ever seen) and Denver. What the Steelers did in Detroit back in February of 2006 was about as entertaining as what the Red Sox did to the Cardinals in the 2004 World Series. The team peaked at the right time, but the post-season peaked early.

That wasn't the case this time. This year, the post-season was consistently good, and it saved the best game for last. But unlike the 2005 season, when there couldn't really be any reasonable debate over who was the best team -- given Pittsburgh's 15-1 record the previous year, followed by the face smashing it dealt to Peyton Manning in the playoffs -- this year's Super Bowl might raise more new and troubling questions about the quality of play in the NFL than we've ever had before. A few completely unsorted thoughts pertaining to that:

A) The officiating all this season was markedly worse than it had been in recent years, and that's saying something. Something must be done about this. I don't care if it means cloning enough Mike Careys to staff every crew for every game, or replacing Terry McAuley and Walt Coleman's entire crews with robots. They must find a way to fix this because it's hurting the game. Case in point:
B) In January of 2008, KillYourFace5000 wrote a phenomenal piece in this space all about how awful the Steelers' offensive line is. That was at the conclusion of the previous year's campaign, in which the Steelers lost their first playoff game to Jacksonville. In the year since KYF5K panned this missive, there was almost complete turnover on the Steelers' offensive line. And for as bad as it was last year -- Marvel Smith, Alan Faneca, Sean Mahan, Kendall Simmons, Willie Colon -- it was actually worse this year.

Kendall Simmons went down early in the season with a critical case of the gout, or a torn shoulder fat or something. He was replaced by Darnell Stapleton, who did absolutely everything that Simmons did, but he was much cheaper and looked perpetually like a confused Whoopi Goldberg. Marvel Smith, who I'm not entirely convinced can walk under his own power for longer than a few minutes, spent more than half the season sitting out, waiting for UPMC scientists to develop and outfit him with a prosthetic back and bionic titantium legs. He was replaced by Max Starks, who actually did a pretty good job, and should be considered as a possible solution at the position next year. Willie Colon is still starting at right tackle, and still likes to try to jump off the line a few mintues early, just to get a good start on his holding penalties. When it comes to pass protection, Colon has matured to the point where he no longer bolts for his own end zone upon seeing a pass rusher. Now, his technique involves either falling down or trying to block Darnell Stapleton's man while Stapleton helps out center Justin Hartwig, who didn't need any help in the first place because he's pretty good at his job.

This is one of the worst all-around offensive lines in football. It can't runblock. Its passblocking is so piss poor that the guy they're trying to protect took a league-leading 46 sacks, and the 49 allowed by the line on the whole was the second-worst in all of football, right behind the winless Lions' total of 52. But Willie Colon is once again an NFL champion; a proud man at the apex of his profession. Darnell Stapleton is a winner. He may not be the best right guard in the business, but hot damn, he's a winner. Kendall Simmons is currently trying to help his body reconcile its fourth consecutive day of heavy partying with fluctuating insulin levels. 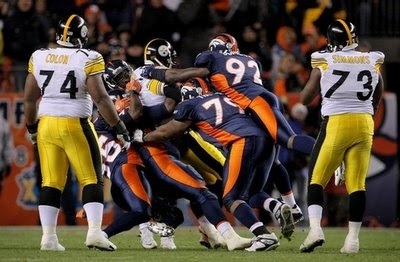 Simmons: Man, Ben's gonn be pissed.
Colon: Naw, man. I read the entire rule book back at Hofstra for football class, and I swear, there's a 15-yard penalty for "piling on." Two or three of these and we're in the red zone!
Simmons: You mean if they call it.
Colon: /looks for flag
Colon: Oh, come on!
Simmons: If he asks, just say it was Coach Z's idea.

We'll likely re-visit this one as the draft approaches.

C) About the parade: I didn't go. Anytime you cram more than the entire population of the city into the six-tenths of a square mile that make up the Golden Triangle, that's the kind of crowd I typically try to avoid. But I did watch Channel 11's coverage of said parade, and I have determined the following things: