We all need to calm down

It's not like the Steelers are leaving town. They're really not.

But ever since news broke earlier this week that Dan Rooney and his son, team president Art II, have been involved in a two-year power struggle with the other Rooney brothers over control of the family's 80 percent stake in the team, everyone in the county has been going totally nuts because there's now a possibility that somebody besides the Rooneys will wind up owning the Steelers.

Brief recap:
Art Rooney, Sr. (henceforth referred to as "The Chief") owned 80 percent of the Steelers. Barney McGinley owned the other 20 percent.
The Chief died, leaving a 16 percent share of the team to each of his sons, and control of the franchise to eldest son Dan. Barney McGinley died, leaving his 20 percent stake to his family.
Dan and brother Art Jr.
Art Jr. helped engineer some absolutely ridiculous drafts and savvy personnel movement that led directly to the team winning four Super Bowls in the '70s.
Dan fired Art in 1987.

That's probably where the division begins. Now, the other Rooney brothers, who are in charge of the family's real estate, dog track, horse track and casino holdings need to divest themselves of their stake in the team to comply with NFL regulations surrounding gambling.

Dan has been trying to buy out his brothers' stakes in the team for going on two years now, and -- in a classic example of why it's bad to mix business with family -- the gradual falling out that began with Dan firing Art Jr. has led to the non-Dan brothers hiring Goldman Sachs to help place a value on the shares and begin lining up investors. Their other motivation for doing this -- and this is where it gets slightly complicated, is that should the non-active Rooney brothers (Art Jr., Tim, Patrick and John) elect for their children to inherit them, their kids would wind up paying about a 45 percent tax on the estimated value of the shares. The entire value of the franchise is estimated at between $900 million and $1.2 billion. So if you're a Rooney grandchild, getting 16% of the Steelers is certainly cooler than inheriting your grandfather's recliner, but you'd wind up having to sell most of it just to pay off the taxes anyway. And we're completely ignoring the whole "sense of entitlement" issue, but that's neither here nor there.

Point is, there's no way the Rooneys are keeping the Steelers a family-owned team, at least for very long. Even if Dan's brothers decide to give him something of a family discount, there's no way they're going to take less than market value for their stakes in the team, and nor should they. It's entirely possible that they could agree to some arrangement that would result in Dan buying part of their shares, and someone else buying another part.

Druckenmiller could wind up buying part of four brothers' stake, but it seems more likely that he'd wind up with about 64 percent -- all four brothers' shares -- and a controlling stake. This would be the easiest way to ease the Rooneys out after Dan either dies or is no longer involved with the team. (Art II could, in theory, hang on for a little while, and he'd probably take over Dan's ownership stake, but don't expect him to maintain control of the daily operations of the team for long after Dan is out of the picture. And nor should he.)

This is a uniformly good idea. Of the 6 billion or so people on the planet, there are very few who could pull off an operation like the one Druckenmiller is attempting. There are even fewer who give a rat's ass where the team plays, as long as it makes them money. Of those who fit the first two criteria, even fewer would let someone else -- someone they didn't hire -- to continue to run the team. The Steelers can't remain in the Rooney family for ever, and if there's to be anything resembling a smooth transition from their reign to the next generation of ownership, there does not appear to be a better option than this, likely because there isn't. This guy isn't Mark Cuban. He's not George Steinbrenner. He's not putting together an ownership group or out gathering up corporate investors. He's a local boy who loves the team and wants to buy it with a suitcase full of cash that he carries with him at all times.

The Steelers are not going anywhere. And assuming this deal gets done, which it should very soon, Steelers fans should consider themselves lucky to have the strong senses of community and tradition that breed respect the kind of respect for the franchise Druckenmiller seems to acknowledge -- respect that's especially helpful when acknowledged and felt by the very, very wealthy. 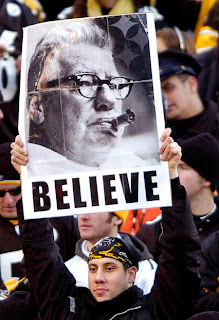 As an addendum to this, ESPN.com has a great piece about Art Jr.'s role in this whole situation, 21 years after his firing:
http://sports.espn.go.com/nfl/news/story?id=3482116