Friends, thank you all very much for coming today.

"And Carl Barger brought forth upon the Pirates a great blessing, and his name was Syd Thrift. And Syd Thrift begat Larry Doughty, and Larry Doughty begat Ted Simmons. And for many years, the disciples of Thrift grew and harvested the talent. And the people drank from the keg of glory. And it was good. But when the time came for Ted Simmons to step aside, a great shadow was cast across the land, and its name was Cam Bonifay. And Cam Bonifay pillaged the talent and stole from the people. And thus began sixteen years of darkness.

"But little did Cam Bonifay know he would inadvertently plant the seeds that would one day grow into a stunning flower -- a symbol of hope for a generation that had known only sorrow. And so it was, on March 30th, 1997 that Cam Bonifay signed left-handed specialist Ricardo Rincon away from the Mexico City Reds of the Mexican League. And Ricardo Rincon was effective against left-handed hitters, which promptly punched his ticket out of our fair city. And so Rincon begat Giles. And so it was, with the passing of Bonifay and the coming of Littlefield, that no good player would go unpaid, and no paid player would go un-traded. And so Giles begat Bay and Perez and "Bar Fight" Cory Stewart. And Perez looked down upon hitters from the mountain top and said, "Bring the heat. Lotsa heat." And the hitters fanned. And Bay calmly stared down every mound opponent from the valley below. But he was not afraid, and worked the count. And through the darkness, the home runs soared."

Friends, we gather here today to close the book on Jason Bay. What can be said of Jason Bay?

Jason Bay was actually a very good baseball player. If you think about it, it's a little unusual.

He didn't hit for particularly high average, but his average was always respectable. He wasn't the most powerful player in the league, but he launched his share of homers and doubles to the alleys. He didn't have the strongest arm, but it certainly wasn't the weakest. He didn't steal the most bases, but he certainly wasn't slow. He wasn't the best defender in the league, but he always took good routes to fly balls, and made his share of spectacular catches. He didn't have the finest strike zone judgment, but he was a remarkably patient hitter, and his ability to get on base was the foundation of his game.

While there was no one aspect of his game that was particularly noteworthy, it was the sum of his tools that made Jason Bay a complete ballplayer.

Also, there was this -- and its importance can't be stressed enough: Bay was, by every account and indication, a fine, intelligent, level-headed human being. After years of Pirates players -- especially good ones -- bringing bad attitudes to work every day, Jason Bay was a breath of fresh air. He wasn't overly emotional or excitable, and he never had the "aw, shucks" air about him that has made Jack Wilson stick. But in an environment like an under-talented baseball clubhouse, where losing can foster the kind of negativity that spreads like kudzu, Jason Bay kept a level head. Whether he was playing well or playing poorly, he wasn't loud, he wasn't flashy, he never popped off or ran his mouth, never sat in the press room telling tales out of school. He didn't complain, and he was refreshingly and tactfully honest.

I'm a numbers man. I own a copy of "Moneyball", I read FireJoeMorgan.com regularly, and I'll argue with you from now until next week that batting average is stupid. There's no question in my mind that in their respective primes, Brian Giles was a better player than Jason Bay. Slightly, but definitively. That said, I would take Jason Bay to as my left fielder any day of the week over Brian Giles. Bay is and will always be a guy I want on my team.

And while I'm certainly upset to see him go, there's something about the way they're doing business around here now that makes me think that this really is for the better, and that everything is going to be okay. If Jason Bay is the last great Pirate we eulogize before the franchise gets over the hump, I'll know that feeling was justified. 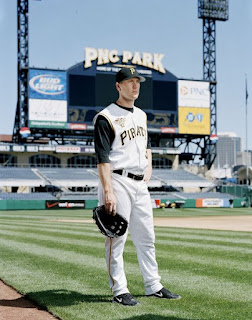 Baseball America did a decent breakdown of the trade. You can find it here: http://www.baseballamerica.com/today/majors/trade-central/2008/266613.html

More on this tomorrow.