Different takes on the Nady/Marte deal

There's still a lot of grumbling going on about the Pirates shipping Xavier Nady and Damaso Marte to the Yankees for Jeff Karstens, Ross Ohlendorf, Dan McCutchen and Jose Tabata. 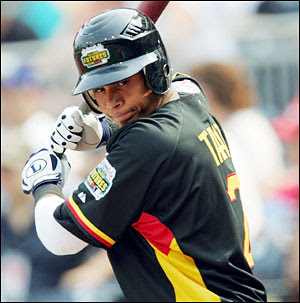 A lot of people who seemed to think that the Pirates got ripped off when the rumored transaction included injured minor league pitchers Phil Coke and George Kontos over Karstens and McCutchen flipped when the actual transaction was announced. But there seems to still be a decently-sized camp of naysayers, including Bill Mazeroski.

From Sunday's New York Daily News:
"I can't believe it!" Mazeroski said. "We just traded two of our best players for four guys I never heard of. How could we do this?"

In addition to the obvious elements that went into the Pirates deciding to make this trade -- lack of organizational pitching depth, lack of superbly talented prospects, long-term control/contract status of the players they were trading versus that of the players they were getting, let's look at some of the criteria by which Pirates GM Neal Huntington evaluates the talent and quality of baseball players:

Any metrics noticeably absent from Neal's list? If you guessed HIHOTG (Have I Heard Of This Guy?), you're right. Give yourself a pat on the back.

But you know, Neal probably thinks he made a pretty good trade here, being the GM of the team and all. So he's biased. Let's see what someone whose job it is to write about baseball thinks. Joe Sheehan, I choose you!

Marte's return may actually put an end to an era in which the Yankees struggled to find effective lefty relievers...Since being dealt by the Yankees to Pittsburgh in 2001 -- for Enrique Wilson -- Marte has gone on to post a 3.05 ERA in 445 2/3 innings...It is possible to have a good bullpen with no left-hander -- the 2004 Angels won the AL West with two innings of left-handed relief all season -- but having a good lefty increases a club's tactical options. Marte is a good one, and a significant piece for the Yankees.

Nady, 29, is more famous but less important. He has established himself as a slightly above-average hitter, a .270 EqA guy who plays acceptable defense in the outfield corners. He's not the .380/.530 guy his current stat line shows; he's having a typical Xavier Nady season with 50 points of batting average randomly dropped in. Remember Gary Matthews Jr. in 2006? That's Nady this year. Even the established-value Nady, however, is an upgrade for a Yankees team that misses Hideki Matsui. Brett Gardner and Justin Christian have combined to bat .188/.267/.263, albeit with 8-for-9 on the bases and some pretty good defense. Nady is about a win better than that, maybe a little more, for the rest of the season. If you estimate Marte's value as about a win -- it's hard to pin down because his value is leverage-affected -- this is a two-win upgrade for the Yankees.

Two wins. Hey, two wins can be the difference when you're in the AL East. And now with Posada on the shelf for the rest of the season, the Yankees might be glad they made this trade when they did, because if they'd waited until Posada elected to have season-ending surgery, they'd have gone to the bargaining table a bit more desperate than they'd have liked.

This is the type of deal that Neal Huntington needed to make. Considering that he flipped an impending free agent (Marte) and a player having a career half, this is a very good deal for the Pirates' first-year general manager.

This is an indelicate comparison, but if you want the optimistic viewpoint, think about Hanley Ramirez, who put up a desultory 2005 season in Double-A, creating whispers similar to what we've heard about Tabata. Three years later, Ramirez is as close to untouchable as any player in the game. That's the kind of talent Huntington is trying to add to Pittsburgh's system, and if the name and the performance aren't thrilling to Pirates fans, the thought process and the approach should be.

Karstens, 25, is a fringe major leaguer who could help patch a decimated rotation. He's probably better than John Van Benschoten. Ohlendorf, who turns 26 next week, is a bit better than Karstens and may have a bit of development left. He could be a low-impact starter in the NL. McCutchen is very polished, and...he has "above-average command of an average-velocity fastball and outstanding curve." Like the other pitchers in this deal, McCutchen is older, at 25, and could upgrade the poor Pirates' staff pretty soon. Perhaps low on upside, but with a good chance of providing a dozen WARP for less than $2 million from now until 2011.

I don't know. It sounds to me like the Pirates got a pretty good deal. I don't necessarily think that anyone fleeced anyone else, which is fine. You don't have to rip another team off to get value in a trade. What do you think now, Maz?

For serious! It's been a while since the Pirates made a logical, even-handed trade like this to unload guys they weren't going to retain and pick up some bona fide young talent in return that will be able to help the club very soon.