The Pirates' 2008 opening day roster may be damn near identical to 2007 roster, but that didn't stop them from re-taking all of the head shots. Let's meet the 2008 Pirates. 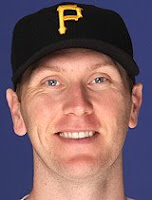 Jason Bay is back. But this time, he's a year older. You can see him starting age here. Every 90-loss season just adds to the crow's feet. It's sad, really. Hopefully, this will be the year they promote Jason to the Yankees, Padres or Dodgers. For his sake. 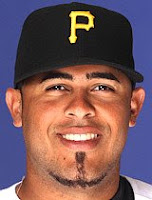 Ronny Paulino is back, and he's the starting catcher...for now. This year, Ronny's sporting a chin-whisker configuration with some meaning (notice the anchor shape). Ronny's dedicated his performance this season to the Tabb High School NJROTC, because those kids we're brainwashing so we can send them to Iraq are the REAL heroes. He's even adopted his own version of their motto: "I Will Not Steal, Nor Throw Out Any Among Us Who Does." 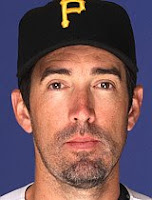 This is Chris Gomez -- one of the very few new faces you'll see on the Pirates this year, having signed a one-year, $1 million contract in the off-season. Chris brings 15 years of Major League experience, 59 career home runs, a .261 lifetime average, and a career 82 OPS+. You might recognize him as bearing a striking resemblance to no fewer than three of the faces from the children's cautionary board game, Guess Who: Registered Sex Offender Edition. 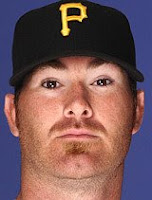 Ryan Doumit's back, this time with a 26% increase in airbrushed face stubble; an ill-fated attempt to offset his raging drag queen eyebrows. 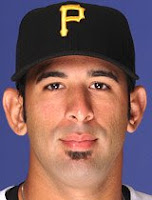 Jose Bautista returns, and he's out to prove he's a legit big-league third baseman. BOLD PREDICTION: He's not. There's a 46-point differential between his major and minor-league on-base averages, and he's yet to top 20 homers in The Show. He's going to have to put up some monster numbers just to stave off Neil Walker, who will be nipping at his heels from Triple-A Indianapolis, and he's not worth a whole ton on the trade market right now. Oh, also, he'll be 28 this year. But he might very well have a much better season than he did last year, as he's no longer facing the pressure of being the most successful grandchild on his mother's side. 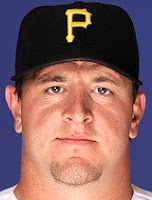 List of things Matt Capps needed badly not to do in the off-season:
Gain weight
Forget how to throw strikes

List of things Matt Capps did in the off-season:
Gained weight
Learned how to use Adobe Photoshop
Grew a goatee
Finally read The Kite Runner
Forgot how to throw strikes (sample size: 1 game) 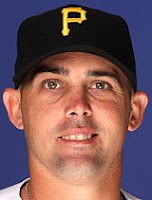 The thoughts and prayers of everyone here at FTC are with Jack Wilson and his family, as he continues to recover from the stroke he suffered in November that paralyzed the entire left side of his face. 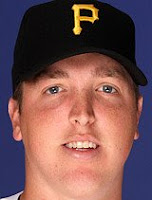 Every year, Tom Gorzelanny looks more and more like Rocky Dennis from "Mask." I mean...Jesus. 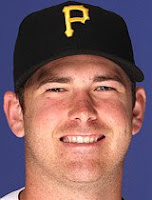 I love how uncomfortable Zach Duke looks in this photo. It's as though right before they clicked the shutter, John Russell told him, "If the National League hits better than .200 off you this year, I'll have Mientkiewicz kidnap and kill your parents. Then, Huntington's going to sell you to wherever Jim Colborn works now. Smile!"

This is Rule 5 draft sensation Evan Meek. He's why Sean Burnett and Burnett's 0.90 spring ERA didn't make the team. If Meek doesn't turn into Bill Freaking Landrum by June, he'll be banished back to Triple-A Durham, because he's not good enough to play for their American League parent club, which is located in Tampa, Florida. 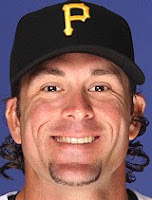 Journeyman infielder Doug Mientkiewicz, who joined the Pirates on minor league contract and made the team out of spring training, spent his off-season selling reefer at Phil Lesh shows. 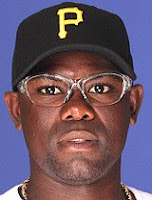 Hey, now! We have a winner. Ladies and gentlemen, I give you reliever Franquelis Osoria, acquired by the Pirates from the 2047 Blue Jays in exchange for some nameless low-level prospect -- who, you have to figure, will turn out to be really incredibly good, since the Blue Jays called from the future and asked to trade for him. But the Pirates made out pretty good on this one, too, as Osoria -- who was born in the Andromeda Galaxy, but grew up in Haiti -- has really crazy glasses. So you know he's sure to be a fan favorite, as long as he pitches on the eight fireworks night when people actually show up to the damn ballpark.
Posted by Matt at 2:52 PM

what is really good with that guy's glasses and also... the man with the neck the size of a maple tree...??? oh my. my not-yet-conceived children are scared!