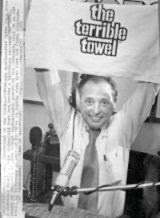 When I was about 12 or 13, I remember going to a Pirates-Mets game with my family at Three Rivers. I went to a lot of Pirates games, but this one sticks out because my dad got the tickets in conjunction with some event a pharmaceutical company was hosting at the ballpark, and we got to sit in the football press box. They'd laid out a nice little spread, so there were hot dogs and chips and all kinds of ballpark foods, and there was certainly nothing wrong with the view.

The drawback was that the press box windows were all closed, and you couldn't hear anything that was going on. And when you're watching baseball, that really detracts from it. This drove us crazy for about three innings before we started looking for somewhere else to sit. Down the press box hallway was a series of doors that led to radio booths, and while the first one's windows were locked, they were already open in the second.

When I went to sit down in on a chair in the first row of the booth, I found two telephone books duct-taped together, with a note on the front that said, "Myron Cope -- Put your sweet ass right here!"

I watched the remainder of the game in the Steelers' radio booth with my family, and my brothers and I each took turns using Myron's booster seat. The Pirates won, and Mets' manager Bobby Valentine was ejected. Jagoff.

I met Myron a few years ago while covering a Pitt football game, but I'll never forget that day I watched the Pirates from his chair. The mystique of the situation was nothing short of surreal. That it sticks out in my mind, I think, speaks to the love and reverence Pittsburgh felt for him. He'll be dearly missed.
Posted by Matt at 10:31 AM