You Can't Fire Joe Theismann, You Can Only Hope to Contain Him! 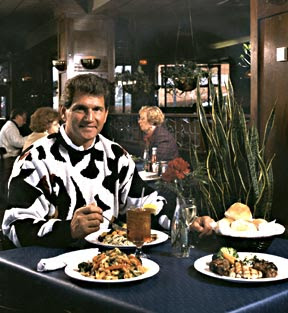 ESPN fired Joe Theismann from Monday Night Football, but that doesn't stop him from being wrong in other venues.
Take this 50-word article, on the best organizations in the NFL:

1. New England Patriots: The Patriots are an outstanding organization and that's because everything starts at the top. The quality of the players and the coaching staff and the professionalism of all the people in the organization are a result of what owner Robert Kraft does and how he handles the organization.

2. Denver Broncos: Another strong, smart owner and again the result is a strong franchise.

3. Dallas Cowboys: Even though he has taken some chances that I might not take as an owner, Jerry Jones does a great job. He wants his team to be the greatest every year and he'll do what he thinks it takes to make that happen.

4. Indianapolis Colts: This isn't just about winning this past Super Bowl. This is about sticking with a great coach when a lot of other organizations would have gone in a different direction.

5. Baltimore Ravens: Brian Billick has been here for a while and has a lot of control over his team's decisions, and his partnership with general manager Ozzie Newsome has produced a pretty consistent playoff contender.

Look, I know the Steelers had a down year last year, and that I like the Steelers more than most teams. But, really, how the hell do you leave that organization off your moron list, Mr. Theismann?

Five (5) Super Bowl titles (including one two years ago), a track record of building through the draft, more consistently good than the Ravens, a rabid fan base in a tiny tiny market, an iconic owner who has completely reshaped diversity in the coach hirings, and unprecedented loyalty to coaches.

But no, instead we have the Ravens for being "pretty consistent playoff contenders," even though they've hitched their cart to Kyle Boller for three years when everyone in America saw he was terrible.

Instead, we have the Broncos, who have a megalomaniacal coach who drafts Maurice Clarett, signs Jake Plummer and has won exactly nothing without John Elway. But they have a "strong smart owner." Since Theismann didn't tell you his name, it's Pat Bowlen, and he's currently in a fight with a former owner about buying shares of the team.

And instead, we have the Indianapolis Colts, because they kept their coach. Who, exactly, would have "gone in a different direction" after Tony Dungy after almost went undefeated and then lost his son?

If this is really an evaluation of organizational skill over the long term (which is the only way I can think of to measure that ability), then you need the Steelers and the Niners. If he means organizations in the NFL right now, then I grant Indy, but you still need Pittsburgh. And then Dallas should probably win a playoff game or something before they make the list.
Posted by Unknown at 4:52 PM

Where'd you get that picture? Perhaps more importantly, where did Theismann get that sweater? Did he skin a cow?

As a Baltimore native and Ravens fan, I hate Joe Thiesmann. He can keep his dumbass compliments. We in Balmer have a love-hate relationship with our team. We love the team, we hate Kyle Boller. Don't give me this paltry "Brian Billick's been there a while" horseshit. Thiesmann, you fuck.